If you had Bring Me The Horizon’s 8-year-old track re-entering the charts because kids on TikTok were setting their mirrors ablaze on your 2021 bingo, congrats! “Can You Feel My Heart,” taken from the Sheffield band’s 2013 fourth studio album Sempiternal, has spontaneously climbed back onto the charts thanks to the help of TikTok youngsters and a lot of hairspray.

But, of course, you can’t have fun on the internet without gatekeepers swooping in to swiftly drop-kick your enjoyment. Days after the trend gained momentum, TikTok descended into the war on newer Bring Me The Horizon fans, many of these elitists arguing that if you didn’t like the band when they released their first album you weren’t a “real fan” — even though most of the kids taking part in this trend weren’t born when Count Your Blessings came out.

Though a constant eye-roll to the music community, there’s actually some things we could learn from the obnoxious gatekeeping.

The aerosol chaos ensued at the start of January after an unknown TikTok account posted an edited version of “Can You Feel My Heart” that transitions from isolated vocals to the whole song – vocals stems are a recurring trend on TikTok, similar with the “All I Wanted” by Paramore trend.

It picked up traction at a rapid speed, the #CYFMH hashtags currently stand at 4 million views and the song made its way onto Spotify’s Global Viral Top 50. Soon enough emos and e-kids alike were spraying hairspray onto their mirrors and lighting them on fire – which probably isn’t safe so we wouldn’t recommend doing it.

Other smaller trends to come from this included flashing lights and transitions. Now cosplayers, anime fans, makeup gurus and even the band have hopped onto the trend themselves with their own creations inspired by the audio.

New Fans and a New Revival

Mostly, it’s just harmless fun from TikTok’s predominantly young audience who are most likely finding Bring Me The Horizon for the first time. “Can You Feel My Heart'' joins a revival arc of the late 2000s to early 2010s that’s receiving viral treatment. “Dear Maria Count Me In” by All Time Low, Simple Plan’s “I’m Just A Kid” or Paramore’s “All I Wanted” are some other examples.

It’s a mixed bag of elder emos reliving their youths once again, and a whole new generation of teenagers who are finding anthems that pioneered angst in the 2000s and are learning how to smear their eyeliner and stocking up on manic panic hair dye for the very first time.

Elitists Feel the Need to Explain BMTH Had One Deathcore Album

It wasn’t long before the elitists wriggled from underneath the underbelly of TikTok, claiming that anybody making these videos who wasn’t drenched in 2010 neon band merch or able to recite every single song from Bring Me The Horizon’s discography was obviously a “poser.”

In these now deleted videos, one TikToker finds a unique way to say that women who like Bring Me The Horizon obviously don’t like their old stuff. I mean why would they, they’re women, of course?!

Discourse ensued, with many “OG” Bring Me lovers fighting back in defense of the newer fans.

TikTok user ginamvrie argues that we, the music community, need to put as much energy as we do into gatekeeping larger bands back into the local community and smaller bands who need that support and attention even more.

Why This is Such a Tired Cliché

The gatekeeper cliché isn’t a new-fangled concept. If you’ve ever dared to wear a band shirt in public without knowing every single song by them, you’ll know the torment and torture it brings.

Reality check: Bring Me The Horizon aren’t your local emo band playing the basement of a grotty, beer-covered dive bar anymore, and they haven’t been for over a decade. There’s not much sense in gatekeeping an arena-selling, award-nominated band that have become a global name. When they’re smashing the charts, they’re infiltrating all avenues of music with the genre-blending capabilities; it’s not really a secret is it?

Any “true” fan will throw down to “The Sadness Will Never End,” but also be able to sing their heart out to “Medicine.” It’s handy that Bring Me The Horizon play old and new hits – don’t fret, their old music isn’t going anywhere and even if you don’t like their new stuff, you can still listen to their older tracks.

It’s worth noting that a lot of these stereotypes have an awful habit of rooting themselves in sexism, as exemplified in the TikTok’s above. Despite the fact that fangirls are the financial backbone of this community, bashing them and trivializing them has become second nature for elitists.

Young women can’t enjoy anything without the ridicule of men, as Sandra Song explains for Pitchfork’s “In Defense of Fangirls.” “...we tell these young women that their interests are less important than what men like. But what’s not real about a 13-year-old girl who’s still figuring out how to express herself about things she cares about?” 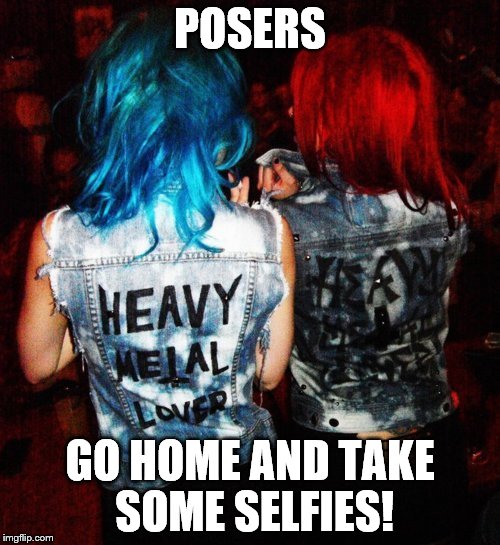 *An internet relic from a time where wearing jackets and being a woman made you a poser.

What We Can Learn From This

Despite being a constant headache to everybody in a 5 mile radius, these elitists serve a few lessons.

Gatekeeping achieves the exact opposite. Given the impossibilities of touring and how artists rely on that, bands will take whatever support they can get. Gatekeeping them away from success is taking food off their plates, rent out of their pockets, it makes their work meaningless if people can’t enjoy it.

As ginamvrie mentions above, for the scene to continue to grow we need to support the influx of new talents coming into the scene. Give the same attention and energy you do into closing off your favorite global artists from the rest of the world into a newer, smaller artist who’s never had recognition or support like that.

Change is good, nobody wants the same recycled riff from 10 years ago. Sure, we love a good ol’ Count Your Blessings guttural! But, That’s The Spirit was the necessary step for the band’s larger success in the mainstream world and became a staple for alternative rock at that time. Really, can you imagine how cringey it would be to see a dude in his 30s dressing like and writing about the same stuff he did at 19?

Mostly, it’s just painfully ironic. When Suicide Season and There Is A Hell… were riding into the next wave of metalcore back in the early 2010s they were heavily rejected by metalheads for “not being heavy enough.” It’s time for these “OG Bring Me” fans to bring an end to the cycle of douchey behavior, you remember how much it sucked to have the band brandished as “pussycore,” why inflict that on others?

Let’s put this curse of the gatekeeper to rest one and for all and just let these kids just have fun. We’re almost pushing 30 now guys, c’mon now.

13 Bands Other People Make You Feel Bad About Loving

Source: Elitists Gatekeeping Bring Me The Horizon Can Actually Teach Us a Lesson
Filed Under: Bring Me the Horizon, tiktok
Categories: News, Rock
Comments
Leave A Comment
Oklahoma Shows Support to Restaurant Thanks to TikTok Video Posted by Staff
University of Oklahoma has Banned TikTok on School’s Network
See Spotify Wrapped 2022 Stats for Over 50 Rock + Metal Bands
Hitting Someone With a Frying Pan to AC/DC’s ‘Back in Black’ Is Apparently a Trend Now
Watch This Inventive R&B Cover of System of a Down’s ‘Chop Suey’
Download Festival Unveils Over 60 Bands for 20th Anniversary Lineup, Metallica Playing Two Sets
There’s a Horror Movie on TikTok Now
When We Were Young Saturday Kickoff Canceled Due to High Winds
Now a Song by Charles Manson Is Trending on TikTok