Loudwire Nights’ airs every weeknight from 7PM to midnight. The show features some of the best bands in rock music, including Avenged Sevenfold, Volbeat, Metallica, Guns N’ Roses, Ozzy Osbourne and more.

Loudwire Nights’ airs every weeknight from 7PM to midnight. The show features some of the best bands in rock music, including Avenged Sevenfold, Volbeat, Metallica, Guns N’ Roses, Ozzy Osbourne and more. And stay tuned for Toni’s interviews with some of the world’s greatest rock bands, as well as the latest news from Loudwire.com. 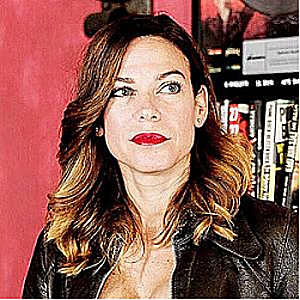 If this was Tinder, I’d just put up a picture and be done with it. But since this is a bio, here’s a little about me: I’m obsessed with rock music, pizza, my dog, my pj’s and a particular type of adult cinema. I love a good rock concert not just because of the kick ass music, the sense of community and the permanent damage to my hearing, but also because I get to wear clothes I would never wear in front of my dad. I’m a Cuban that moved to Miami when I was two and I definitely did not arrive via private jet…. Let’s just say I learned to swim at an early age. I began my career in radio at 18, studied broadcasting journalism, and worked in TV and news print as well. So I’ve been heard, seen, read and I’m sure sniffed a few times along the way. I can recite the lyrics to any Nine Inch Nails song, am confident that with this job I’ve achieve more success than all of my ex-’s combined, and I am certain coke in a glass bottle tastes way better than in a can. If you want to know more about me reach out on the time suck social media platform of your choice.
Show More
Smashing Pumpkins’ Billy Corgan on Playing the ‘Heel’
Ghost Are Like ‘Star Wars': Tobias Forge Explains
Avenged Sevenfold’s M. Shadows: Unifying ‘Wish You Were Here’ Cover Perfectly Timed for World at ‘Complete Breaking Point’
Avenged Sevenfold’s M. Shadows on Loudwire Music Awards: It’s Important That Rock + Metal ‘Do Our Own Thing’
In a chat with Loudwire Nights host Toni Gonzalez, Avenged Sevenfold's M. Shadows discusses why it's important to have events like the Loudwire Music Awards.
Toni Gonzalez
Prophets of Rage’s Tom Morello: ‘We’ve Never Felt More Accomplished Musically Than on This Record’ [Interview]
Loudwire Nights interviewed Tom Morello about Prophets of Rage's debut album and more.
Toni Gonzalez
Bush’s Gavin Rossdale: ‘Black and White Rainbows’ Is ‘By No Means a Breakup Record’ [Interview]
Bush's Gavin Rossdale discusses the 'Black and White Rainbows' album, his role as a coach on 'The Voice UK,' his clothing line and more with Loudwire Nights.
Toni Gonzalez
Metallica’s Robert Trujillo Names Gojira + Avenged Sevenfold Among Bands in Line for Metal Crown
Speaking with 'Loudwire Nights' host Toni Gonzalez, Metallica's Robert Trujillo makes his picks for which bands to hand over the metal crown.
Toni Gonzalez
Metallica’s Robert Trujillo Recalls His Favorite Lemmy Kilmister Story
Metallica bassist Robert Trujillo recalled being in the middle of a conversation between Lemmy Kilmister and Joni Mitchell after introducing the two.
Toni Gonzalez
Metallica’s Robert Trujillo: ‘If People Want to Nominate Us for a Grammy, Then We’ll Take It’
Metallica's Robert Trujillo spoke with Loudwire Nights host Toni Gonzalez about the band's success with Hardwired... To Self-Destruct, their Grammy nod + more.
Toni Gonzalez
Soundgarden’s Kim Thayil Talks ‘Badmotorfinger’ Reissue, 2017 Plans + ’90s Grunge Explosion
Loudwire Nights host Toni Gonzalez speaks with Soundgarden's Kim Thayil about the band's 'Badmotorfinger' 25th anniversary reissue, their 2017 plans and more.
Toni Gonzalez
Alter Bridge’s Mark Tremonti + Myles Kennedy Talk ‘Show Me a Leader,’ ‘My Champion’ + ‘The Last Hero’ Songs
Loudwire Nights host Toni Gonzalez speaks with Alter Bridge's Mark Tremonti and Myles Kennedy about 'Show Me a Leader,' 'My Champion' and 'The Last Hero.'
Toni Gonzalez
The Pretty Reckless’ Taylor Momsen Talks ‘Who You Selling For’ Album, Touring + Inspirations
The Pretty Reckless' Taylor Momsen talks with 'Loudwire Nights' host Toni Gonzalez about the 'Who You Selling For' album, touring and her personal inspirations.
Toni Gonzalez